Dominica Is the Best Country for Citizenship by Investment, FT's PWM Report Finds

The Government of Dominica

ROSEAU, Dominica, Sept. 8, 2020 /PRNewswire/ -- For the fourth consecutive year, the Commonwealth of Dominica ranked first in the CBI Index — the most prestigious study into all active citizenship by investment (CBI) programmes in the world. On September 7th, Professional Wealth Management magazine — a publication from the Financial Times — released the new edition of the CBI Index, comparing 14 programmes against nine so-called 'pillars'. 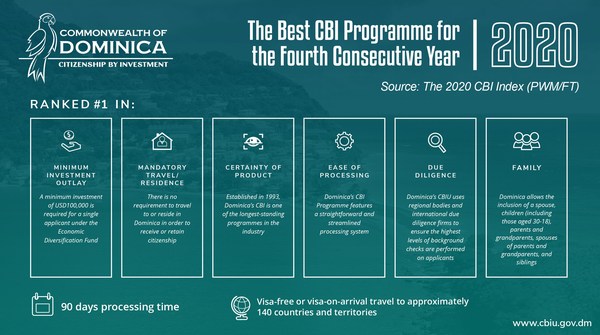 For the fourth consecutive year, the Commonwealth of Dominica was ranked as offering the world’s No. 1 Citizenship by Investment Programme, according to the 2020 CBI Index, published by FT’s PWM magazine.

Dominica came first in the CBI Index yet again, scoring maximum points in six pillars, including the new ones added this year, measuring family appeal, and the programme's certainty. Other pillars Dominica scored top marks in include strong due diligence, ease of processing, lack of mandatory travel or residence, and affordable minimum investment outlay.

"Emerging for the fourth consecutive year as the world's best CBI programme, Dominica balances an excellent reputation for meeting the needs of investors with strong due diligence, a low minimum investment outlay, efficient processing, and a renewed focus on family reunification," the report reads.

Researcher James McKay makes good note of the recent changes to the definition of 'dependant' and post-citizenship additions under Dominica's CBI Programme. He observes that Dominica offers one of the most sibling-friendly programme, which makes provisions for a wider age eligibility. Similarly, those who have already obtained Dominican citizenship via CBI can now add more dependants after the initial application, such as new-borns, new spouses, and pre-existing dependants.

Ambassador Emmanuel Nanthan, the Head of the Citizenship by Investment Unit (CBIU) in Dominica, comments: "We are honoured to be crowned once again the world's best country for citizenship by investment. CBI plays a major role in our economy and daily lives, and we work hard to maintain high standards of integrity, efficiency, and, importantly, a tangible impact on our population."

As regards how 'certain' Dominica's CBI Programme is, the researcher notes that, having been established in 1993, it has "stood the test of time". The report concludes that Dominica is "a highly reputable destination for second citizenship." Moreover, the report notes the island's welcoming environment: "countries like Dominica offer verdant nature, sunshine, clean air, and year-round access to lush fruit and vegetables."

Prime Minister Roosevelt Skerrit said: "For us, foreign investors who become our citizens through CBI are truly valuable partners. We are proud to call them our own and to offer them a truly spectacular place to call home."

Individuals and families wishing to obtain Dominica's citizenship must first pass a series of due diligence checks. Once successful, they can either make a minimum contribution of US$100,000 to the Economic Diversification Fund or invest at least US$200,000 in pre-approved real estate.

Applications can only be submitted through an Authorised Agent. Processing takes three months on average. In light of Covid-19, the CBIU has temporarily allowed Authorised Agents to submit applications online, with the original documentation required at a later stage.

Living a Life of Travel as a Full-time Blogger and Digital Nomad: Bel Around The World